The ingredients of a classic Pizza Margherita represent the colors of Italy with its ripe red tomatoes, white Mozzarella cheese, and fresh green basil. This attractive combination of simple, yet delicious, ingredients explains why it is a favorite of pizza lovers everywhere.

This version combines all of the above with a well-seasoned cast iron cooking surface and a super-hot 500°F oven to deliver a delightfully crispy crust with a soft, but not overly chewy, interior.

It’s no secret that large cast iron skillets are great for making deep dish pizzas at home, but there are a couple drawbacks to this application. For starters, it is challenging to cut the pizza without damaging that highly coveted well-seasoned surface that makes cast iron cookware so famous. What’s more, it is also difficult to transfer the whole pizza from the skillet to a safe cutting surface to avoid this problem.

For this reason, the flat surface of a 10½-inch square cast iron combo grill/griddle* is used here instead. Because it doesn’t have high sides, this piece makes it super easy to slide the finished pizza onto a more suitable surface before slicing.

**This recipe yields enough dough to make two medium-crust pizzas on the cast iron griddle shown. If preferred, the dough can be divided to create three thin-crust pizzas of this size. Unused dough can be wrapped tightly and refrigerated or frozen for later use.

Toppings Ingredients (for one pizza):

***San Marzano tomatoes are often used for Pizza Margherita, partly because they are less watery than other varieties. If they are not available locally, you can substitute other varieties, as well. The variety shown here are Campari, which are rounder and juicier than the San Marzano. If you are worried about a soggy crust, chop the tomatoes instead of slicing them and strain for excess liquid before placing on top. 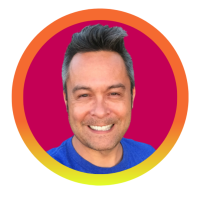 Hey! Thank you for taking the time to get to know me here! As a 2X cancer THRIVER I believe the power of healing and transformation starts in the Mind and in the Gut. Are you ready to take control of your Health and Life? Join me.